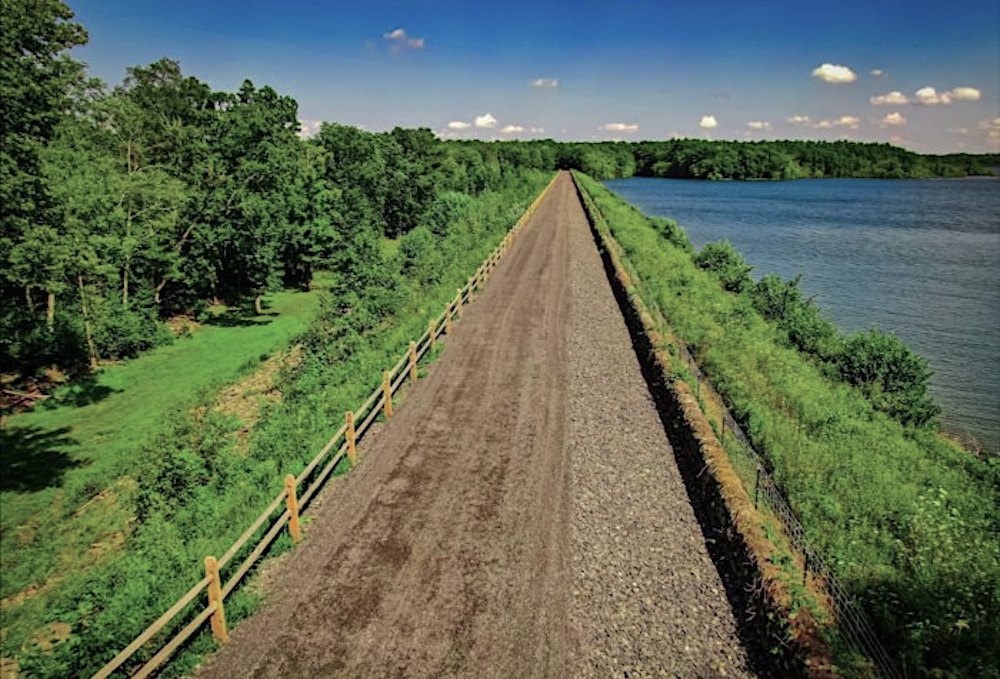 “Ranger” Dave Holden shares a new perspective with Inside+Out Upstate NY on the Ashokan Rail Trail (ART), the 11.5-mile recreational trail that runs along Ashokan Reservoir between West Hurley and Boiceville. Throughout the year, this newly created park provides spectacular seasonal views and is a fabulous way to spend a few hours for a lovely stroll, a bike ride, walking your dog (on a leash), running and bird watching. 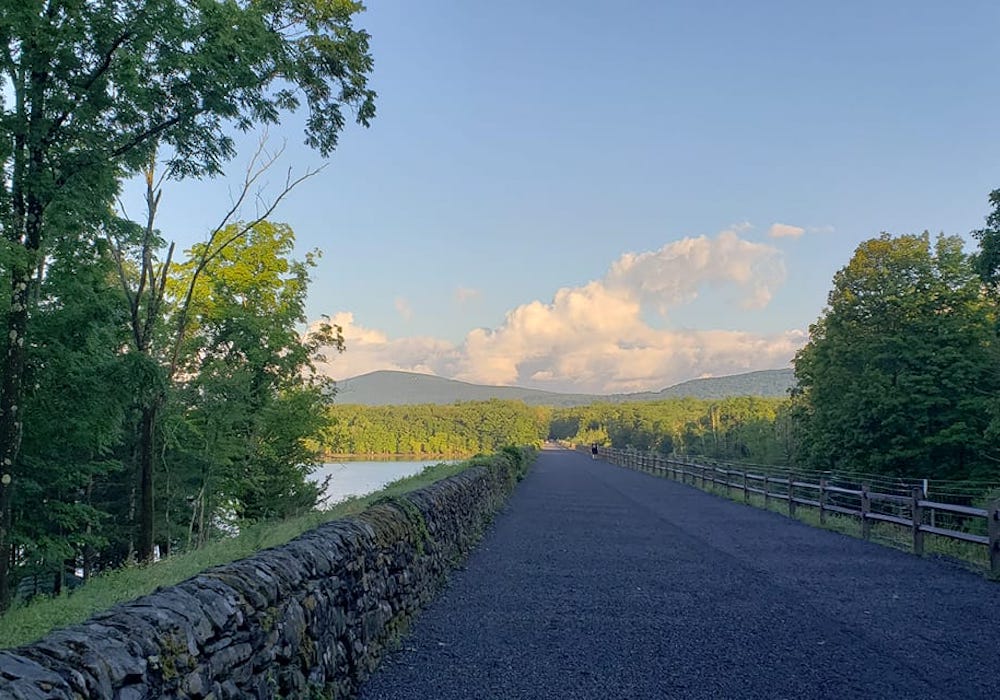 Dave Holden:  An interesting phenomenon one notices almost immediately upon exploring the Ashokan Rail Trail–or any other rail trail, is the constant vanishing-point that keeps receding both ahead of you as well as behind – a consistent moving perspective. This is the nature of the long, straight reaches that trains require, occasionally punctuated by equally long, gentle curves as tracks loop around mountainsides or take the train to either a higher- or lower altitude. 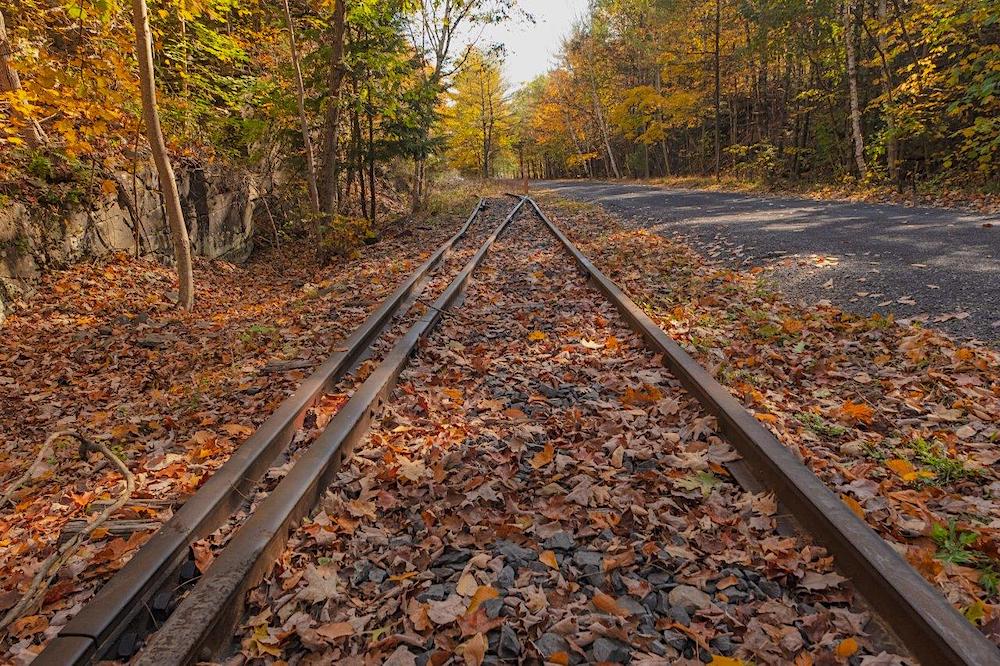 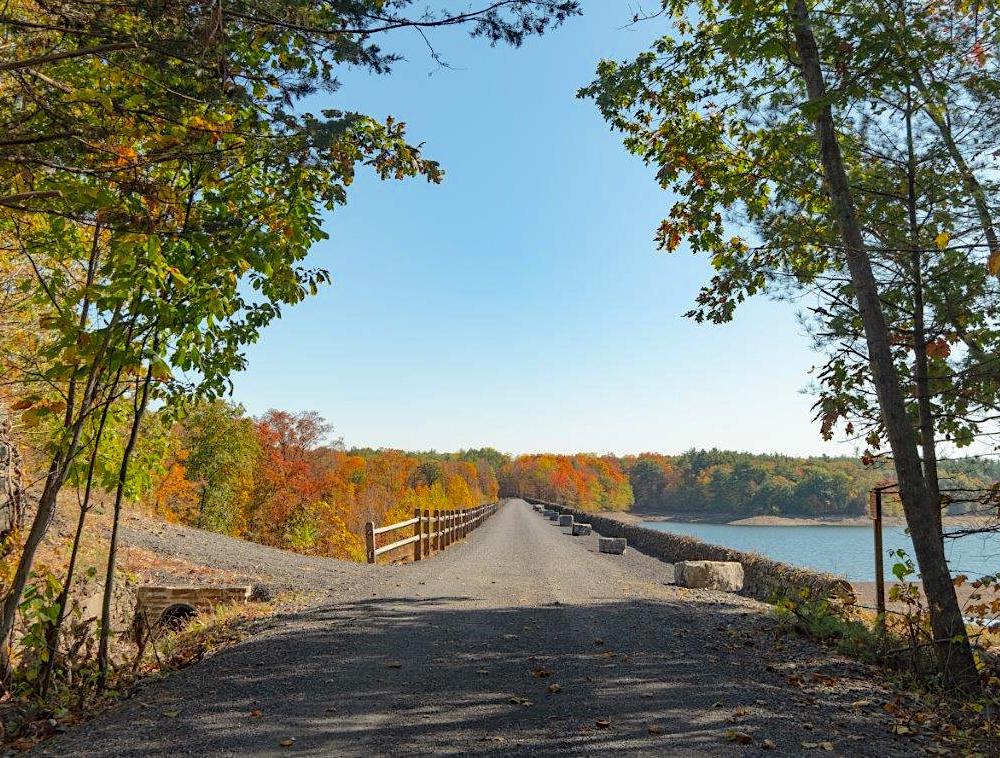 The Ashokan Rail Trail, launched in 2019, is the latest edition to our region’s growing number of trails and is considered (accurately, I believe) to be its crown jewel. This wonderful new linear park runs 11.5 miles, almost entirely along the north shore of the Ashokan Reservoir, and provides an extraordinary experience that engulfs the visitor in a full-spectrum immersion into the southeast Catskills.

You will trek through deep cuts in the local shale strata that will give a glimpse into the deep time that is reflected in the region (one of the oldest areas on earth, geologically), then you will come out onto a wide-open vista and be surrounded by the majestic mountains that are the roots of even more immense, primordial peaks. This path–like many railroads–follows an ancient trail, this one once known as the Onteora Trail. I find it interesting that this old, old trail is once again being used for the foot traffic it was originally made for.

And there’s the other meaning for the word “perspective” – looking at an idea from different angles. Indeed, the Ashokan Rail Trail makes us look at our land in new ways. Here are three points of view:

In addition to giving us access to some of our region’s most outstanding views and their history, the ART also allows us to see up close many of our living, natural wonders. It is not at all uncommon for people to see one or two of our numerous Bald Eagles, or to have an Osprey dive on a fish close by. Actually, the rail trail is already well known for its birding, in general.

Also, if you keep your eyes open, you may witness any of the following local wildlife: Black Bear, Eastern Coyotes, Fishers, Grey and Red Foxes, Raccoons, Snapping- and other Turtles, White-tail Deer and many others. And let’s not forget the myriad of insects the birds feed on and the many species of plants, shrubs and trees that they nest in. In. order to avoid contact with wildlife, please do your best to keep Fido on a leash. 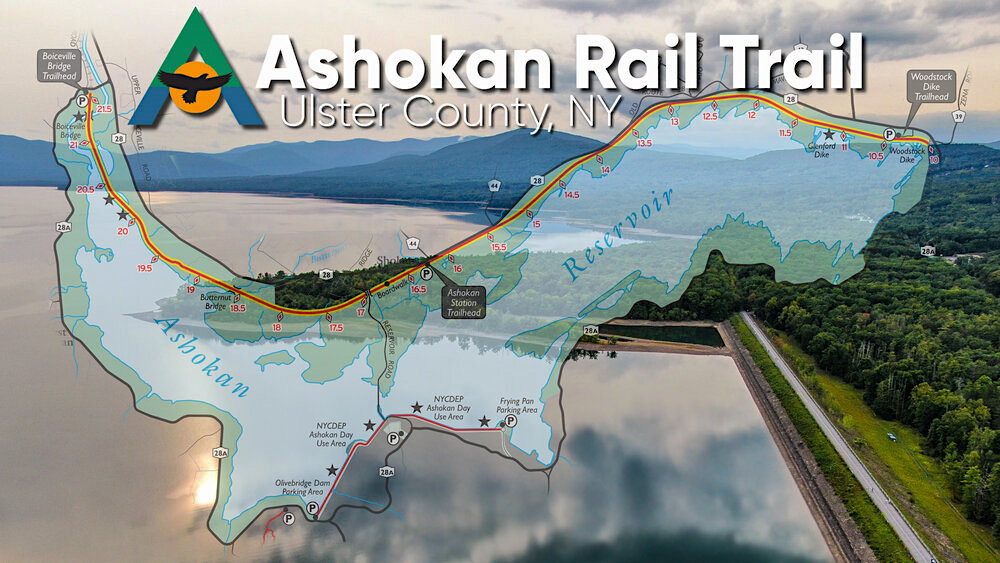 The Art of Making the ART

The Ashokan RailTrail did not come about by accident or by magic (though the results can certainly be magical). It follows the tracks of the old Ulster & Delaware Railroad, which in its day was a major contributor to the growth of the Catskills, shipping freight and people from the Rondout in Kingston as far west as Oneonta for many years. Then the Age of the Automobile put an end to the Railroad Era. For a number of years, a group of serious railroad enthusiasts tried to maintain the tracks with dreams of reviving the rails but were not up to the task. Since Ulster County owned the right of way, they took the responsibility of finding out how to use this obviously-potential resource. This was a challenge because everything about it was rapidly deteriorating. The tracks themselves were detaching from their ties as they rotted and the banks holding the ties gradually started washing out.

While the actual rail right-of-way is indeed owned by the County, all of the surrounding reservoir lands are owned by New York City’s Department of Environmental Protection (DEP). They became concerned about the creosote from the old railroad ties and other chemicals leaching into the Reservoir, the City’s main water-supply. Fortunately for all, Ulster County decided on a course that would replace the aging, defunct old rail line with the state-of-the-art Ashokan Rail Trail. They did this by careful, detailed planning and by bringing in many community partners, including DEP, New York State Department of Environmental Conservation (DEC), the Catskill Center, NY/NJ Trail Conference, the Open Space Institute (OSI) and the Woodstock Land Conservancy (WLC).

Here is a video by Bartoon & Loguidice who was hired to convert the 11.5-mile section of the Ulster and Delaware Railroad corridor into a 12’ wide multi-use trail on the edge of the Ashokan Reservoir.

The Ashokan Rail Trail from Barton & Loguidice on Vimeo

In my opinion, the most important partner of all was definitely the DEP, who made the awesome decision – for the first time in 100 years – to allow the public onto DEP land without permits (but ONLY on the trail – all adjacent lands require a permit, available on their website). We should be forever grateful to them – they could have just closed it all up and we would never be able to enjoy the ART and all it encompasses.

Allowing the public to access the ART comes with responsibilities which include always “taking out what we bring in” – Leave No Trace. And since right now dog-walking is allowed, removing dog waste is of the utmost importance, particularly because of the proximity to a major public water supply. If at some point there is a recurring issue with dog-owners failure to do so the DEP has every right to prohibit dogs on the ART.

In addition to deftly weaving together multiple partners, Ulster County accomplished this phenomenal feat through extensive and detailed planning. New and better bridges were built over formerly eroded streambeds that were repaired. Ruined wetlands were revived. The execution of the construction of the trail-bed itself was top-notch, consisting of compacted crushed stone which drains well and allows efficient traction for bikers, walkers and wheelchairs (every inch of the ART is ADA-accessible). 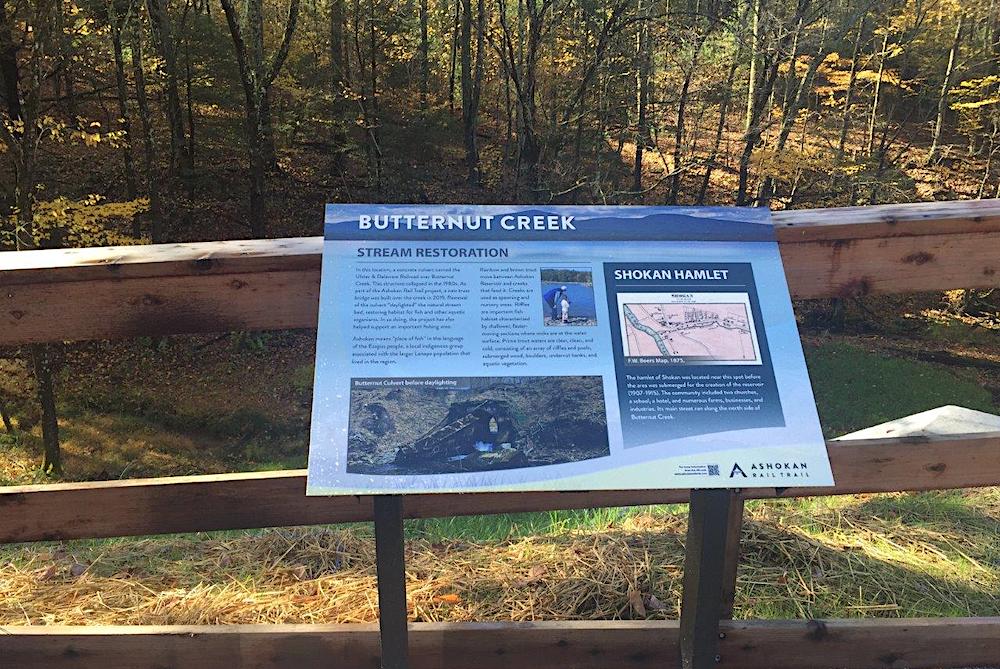 Another deft planning touch is the addition of weatherproof interpretive panels which inform you about whatever history was present at a given location. The entire trail is rich in history! These range from ones that recognize the ancestral role that the Indigenous People in this ancient, now-drowned landscape played. In this case, they acknowledge the Esopus Band of the Lenni Lenape who inhabited this lost valley long before settlement. There are signs that tell you what towns were in which location before their removal to make the reservoir. Other signs explain the important role that the railroad played. So when you travel this ancient trail, which locals and visitors alike make efficient use of this time of year, know that it is an example of how we want to honor our history, enjoy our present and use it as a Path to the Future.

About Ranger” Dave Holden
Dave Holden is a New York State DEC Licensed Hiking Guide with many years of experience on Woodstock trails, old and new. We are thrilled to share Dave’s local expertise as he showcases the beautiful places in the area that regular trail hikers miss. He is also available for hire to lead guided nature hikes. 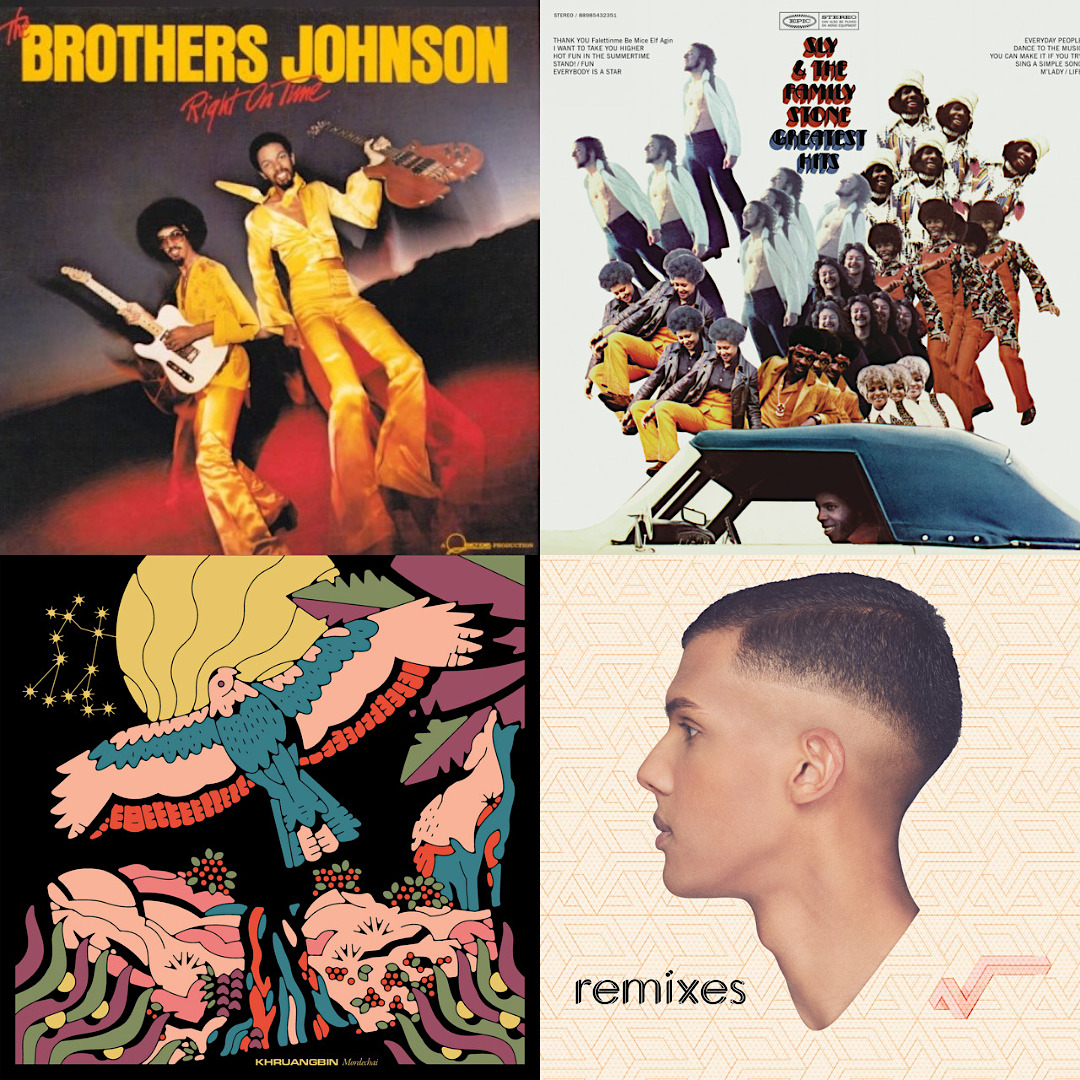 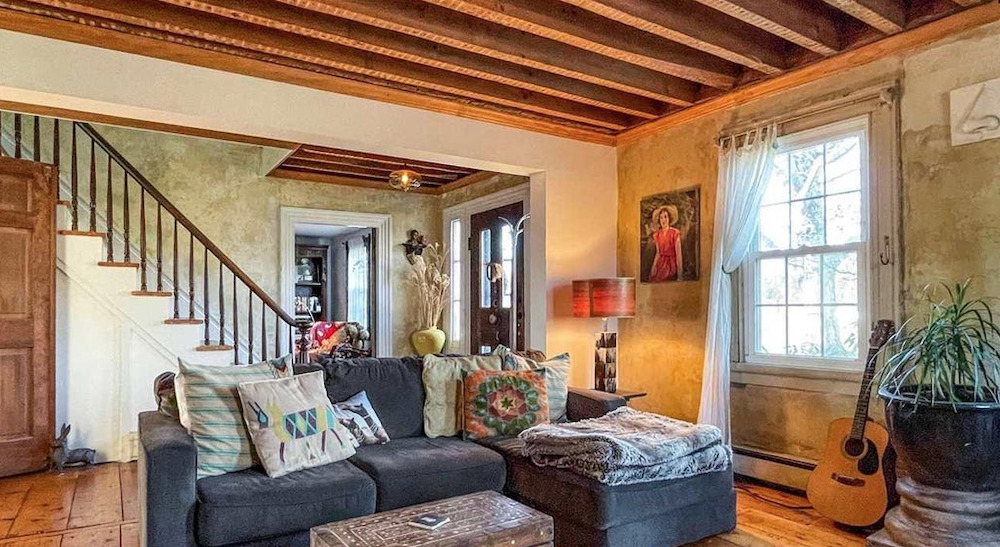 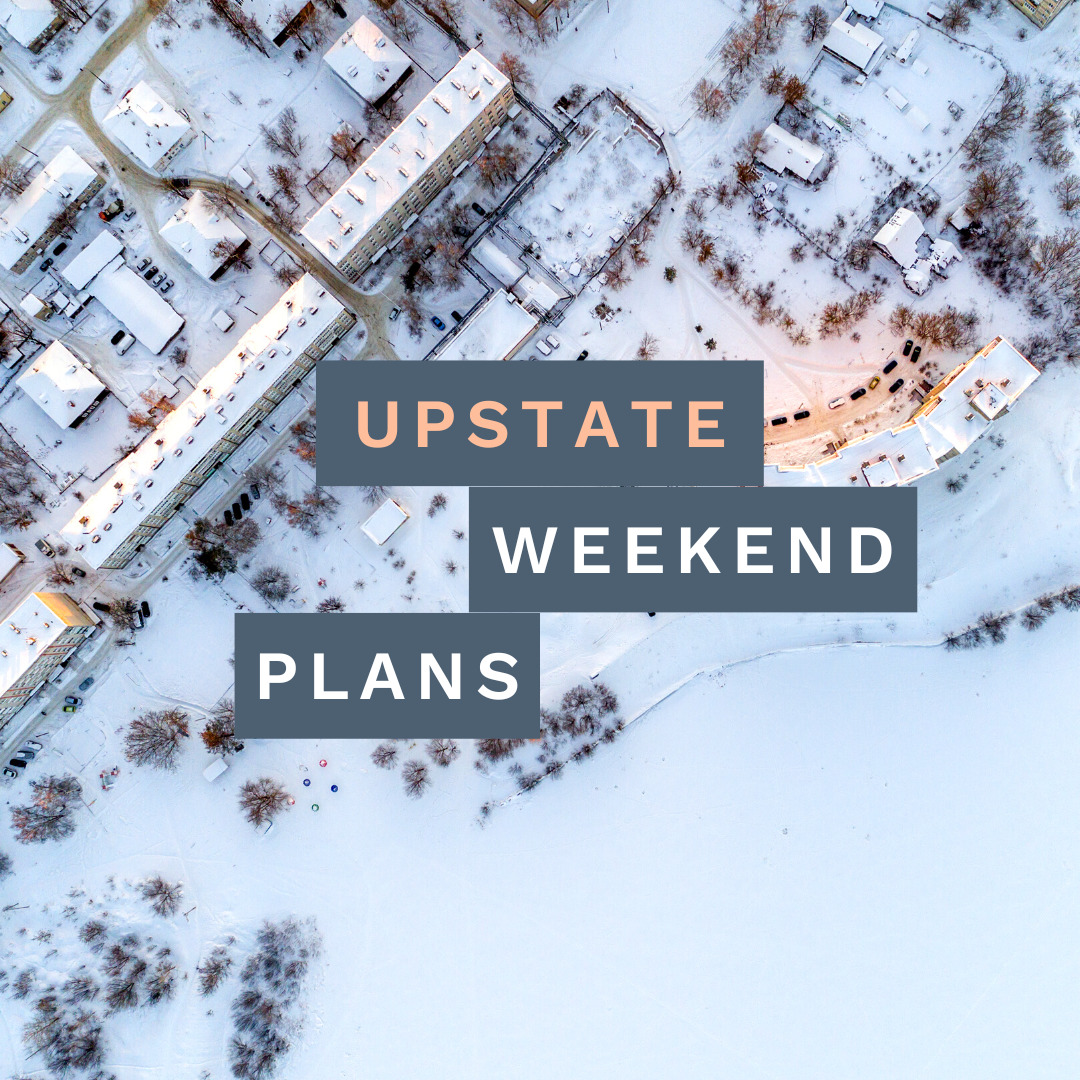